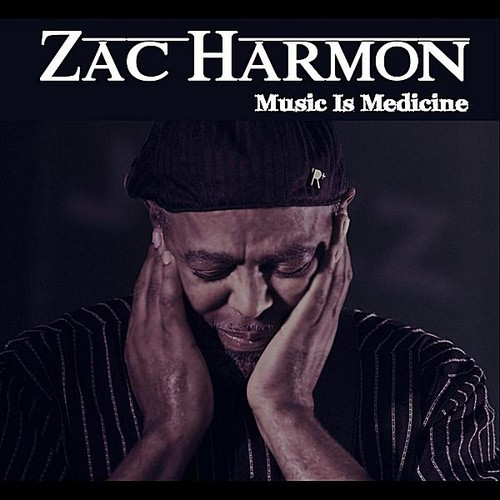 THE MUSIC Music is Medicine represents Zac Harmon's 'take' on the Blues. It is purposely and decidedly a portrayal of what he was feeling when he wrote and recorded the songs and with that, the listener is well rewarded. As a longtime, successful writer and producer, Zac is uniquely blessed with the ability to craft songs for others and after decades on duty, he certainly knows how to deliver for himself. This CD is a total experience in feeling good; from 'I'd Rather Be With You' to 'Talk to Me' to 'Joanna'. It takes you on a laid-back, rhythmic ride with 'Miss American Girl' and 'Drowning in Hollywood' and soothes your soul with 'Wounded', 'Grandma's Prayer' and 'I'm a Healer'. His guitar is represented well throughout the album, especially on 'Blue Pill Thrill', 'Country Boy' and 'Running from the Devil'. Zac's band mates, Corey Lacy, Cedric Goodman and Buthel lend vocals and playing. Other noted contributors include Sueann Carwell (vocals), Gregg Wright (guitar) and BR Millon (guitar), along with recording and production work from Christopher Troy, Corey Lacy, BR Millon and Matthew Harmon. Music is Medicine is undoubtedly Zac Harmon's best contribution to the genre and is a must-have for Zac Harmon fans, Blues lovers and those who simply appreciate exceptional music. THE ARTIST Born and raised in the heart of Jackson, Mississippi, Zac Harmon is a true disciple of the music that emanated from the city's historic Farish Street District, universally recognized as the home of such great Blues legends as Elmore James. While in high school and college, Harmon gigged as a guitarist for the likes of Z.Z. Hill, Dorothy Moore and Sam Myers. Relocating to L.A. in the early 80's, he worked as a studio musician; then established himself as a writer and producer, crafting songs for the likes of the O'Jays, Whispers, Karyn White, Alexander O'Neal and Black Uhuru. Composing and performing music for a movie score, compelled Harmon to pursue his longtime dream of returning to his roots to record his first Blues project. The result was 2002's Live at Babe & Ricky's Inn, an electrifying testimony to Mississippi Blues, which showcased the genre at it's best and introduced Harmon as a true torchbearer for the "next generation of the Blues". In 2004, with his then band (the Mid South Blues Revue) he won the Blues Foundation's prestigious International Blues Challenge (IBC) "Best Unsigned Band' title. That release was followed in 2005 by The Blues According To Zacariah, which garnered major national airplay and critical acclaim. XM listeners voted Harmon "Best New Blues Artist" in the inaugural XM Nation Awards in 2005. In 2006, Harmon won the Blues Music Award (BMA) for "Best New Artist Debut" for The Blues According to Zacariah. Later that year, he was featured in Blues Revue magazine, as one of the 10 artists that "...represent the future of the blues". 2007 saw Harmon named to the Blues Foundation's board of directors and entering into an endorsement deal with Category 5 Amplification. In 2008, he released Shot in the Kill Zone in Europe, recorded live at the Lionel Hampton Room in Paris. He signed with the Northern Blues label for his From the Root CD, released early 2009. Harmon also marked his acting debut in '09 with a major role in the independent film Black and Blue. Also that year, he was honored for his career achievements in his beloved hometown at the Jackson Music Awards. Weeks later in Nashville, the Jus' Blues Music Foundation bestowed the "Little Milton" Guitar Award for "Outstanding Guitar Player" upon him. Zac Harmon has entertained U.S. troops in Iraq and Kuwait as one the stars of Bluzapalooza. While headlining "The Pizza & Pyramid Tour" of Sicily, Italy and Cairo, Egypt, Harmon and company made history with a rare performance at site of the Great Pyramid and the Sphinx, making the ensemble only the second Blues act to do so. Zac has been a featured performer for the "Mississippi Celebrates it's GRAMMYr Legacy" event. In 2010, Peavey Electronics founder and CEO Hartley D. Peavey presented him with a Peavey Award which honors the state's many GRAMMYr winners and nominees as well as individuals who have played a significant role in developing and furthering Mississippi's musical heritage. In 2011, Zac won the Jus' Blues Music Foundation award for "Best Contemporary/Traditional Blues Artist - Male". Harmon was also recently chosen as one of the artists to be included in "Blues @ Home", a project by award-winning Mississippi artist H.C. Porter and renowned producer, composer and songwriter Tena Clark. "Blues @ Home" will document Mississippi's living Blues legends through mixed media paintings, oral histories and music recording. Zac Harmon continues to tour internationally as an ambassador for the Blues.