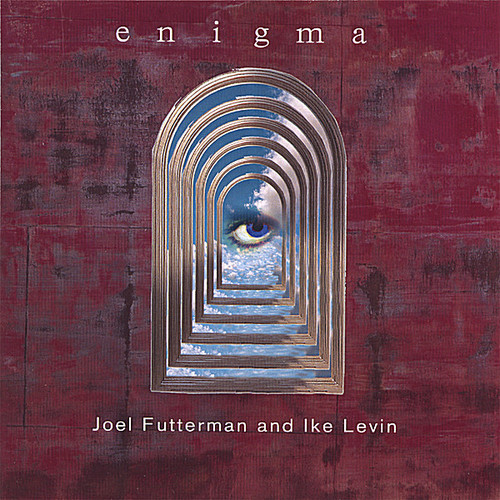 Enigma is a new recording by two of the foremost leading innovators in creative music today, pianist and multi-instrumentalist Joel Futterman and multi-reed player Ike Levin. This CD represents another in an expanding series of documented collaborations between these two highly skilled and adventurous improvisers. Musical ideas launch with soaring expansions and flow with fire and ecstatic energy. More abstract musical forms and ideas morph back and forth between rich harmonic undercurrents and melodic overlays. Levin testifies with scorching bellows and cries and angular lines over the churning and evolving torrents laid down on the piano by Futterman. Yet, even at the heights of abstractness and expressiveness their music swings with conviction. These two musicians clearly share a common vision and strong intuitive connection that is evident in the richness and variations in their music. The Village Voice has referred to Futterman and Levin as two 'highly committed creative artists who do not compromise their art.' About the Musicians: Joel Futterman, Piano, Soprono Saxophone Pianist Joel Futterman known for his spirited, highly imaginative, and innovative piano technique is a veteran pioneer into the frontiers of spontaneous, improvised music. He is considered one of the foremost inventive and adventurous artists shaping the creative, progressive music scene today. For Futterman, his highly developed and distinctive piano technique is only a means of expression for his deep reservoir of creative energies. He has performed across North America and Europe including at such noted music festivals the Visions Festival in New York, The New Orleans Jazz & Heritage Festival, Berlin Jazz Festival, and the North Sea Festival in Dennmark. He has compiled a discography of over 40 recordings including work with such notable jazz innovators as Jimmy Lyons, Rahsaan Roland Kirk, Joseph Jarman, Richard Davis, Al Fielder, and Hal Russell, as well as Edward "Kidd" Jordan with whom he has had a highly productive association over the past 10 years. Ike Levin (Tenor Saxophone, Bass Clarinet) Ike was born and raised in Chicago and moved to the San Francisco Bay area around ten years ago. He studied with the legendary jazz Chicago saxophonist Joe Daley and Fred Anderson, co-founder of the Chicago based Association for The Advancement of Creative Music (AACM). He also studied musical composition at Roosevelt University Music Conservatory in Chicago. He displays an aggressive, brawny approach to improvisation combining expressionistic blowing and atonal phrasing with more melodic ruminations. Levin's strong, free improvisational talents are rooted in a reverence and appreciation for the blues, bebop, and contemporary chamber music. Silence and space are as important in his musical phrases as sounds he expresses. He views improvisation as an "uncompromising and profoundly spiritual experience. In addition to his work with Joel Futterman, Ike has recorded and performed around the U.S. and Canada with such noted creative musicians as Alvin Fielder, Kash Killion, Oluyemi Thomas, Igeoma Thomas, Reggie Nicholson, Damon Smith, Wilbur Campbell, Von Freeman, Robert Barry, and Smiley Winters, as well as leading his own small ensembles. '
This website uses cookies to personalize content and analyse traffic in order to offer you a better experience.
I accept Learn More
back to top