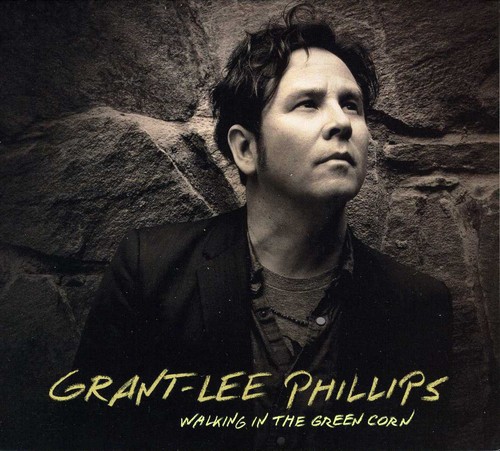 "History and legend have often found their way into my songs" reflects Grant-Lee Phillips. "But sometimes, I don't have to look quite so far to find inspiration." Walking in the Green Corn, is the newest album by Grant-Lee Phillips. It's ten songs are drawn from Phillips' intensive investigations into his native lineage. Phillips, who is Muskogee (Creek), elliptically explores the intersection of past and present, personal and political. While the songs delve deeply into the subconscious mystery of his own back-story, they simultaneously reveal the resonance and insight of ancient myth in parallel to contemporary man's emotions, actions, and errors. Composed in a concentrated burst over the course of a few winter months, Walking in the Green Corn came about almost too quickly to censor-the unfiltered sum of years of rumination and discovery. As the days became shorter, the nocturnal Phillips became more productive. "I'm pretty good in the morning," he says, a smile emerging, "which for me is about 2pm. I find that in a half-awake state, I can make a little bit of headway. Then I become more conscious as the day goes on...I have to wait until the evening and the rest of the world has quieted down to resume." What initially began as off-the-cuff home recordings, designed to capture the songs at the moment of conception, soon took on a life of it's own. "Initially I figured that, somewhere down the road, I'd get some musicians together in a cathedral-like space and re-record these songs," Phillips explains. But the disarmingly warm, bioluminescent quality of his simple home recordings had the certain weathered elegance that, in Phillips' words, "would have driven me mad if I attempted to recreate them in a professional studio environment." With the exception of violin and vocals by Sara Watkins (formerly of Nickel Creek) and an understated vibraphone part by Alexander Burke, everything on Walking in the Green Corn was performed, sung, and engineered by Phillips. "I do my best work when nobody's paying attention - including myself," he recalls. "That's what happened: it really snuck up on me. By the end of the year, I had most of the album written and recorded. Little by little I'd play the songs back for my wife, Denise (Siegel), on long drives up the San Joaquin Valley. She's an artist and writer with uncanny ears and instincts. She kept me aimed in the right direction, brought a lot of objectivity to the project. Denise was my co-producer here." The mix of euphoria, wonder, and caution brought about by fatherhood-a heady emotional cocktail that fueled Phillips last album, the critically lauded Little Moon-also played a hand in this projects, as his thoughts turned to his own mixed heritage. He has always found his ancestry, which encompasses both Native American peoples European settlers to be a fertile source. "Connecting to my ancestry is like having this deep trunk that's embedded in the earth, with deep roots. It was always something that was important to my grandmother, who was Creek, and to my mother. So, after becoming a father, I wanted to be able to answer all those questions I know I'll be asked one day, when my daughter takes an interest in where we come from." The opening "Vanishing Song" functions equally as an ode to rediscovering the ancient songs of his forefathers and as a longing for a purity and wisdom long corrupted by modern man's material lust. A similar theme pervades "Fool's Gold," of which Phillips says, "Perhaps there is no other kind of gold. Look what it does to us, look how it drives people mad. Look how it drove a whole nation westward and all the suffering that came with it." Exploring timeless myths and rituals also lead Phillips to discover a certain palpable awe and majesty in life around him that mirrors his ancient inspirations. The loping "Grey Horned Owl" celebrates a beast long associated with insight and wisdom, equating it's constancy and calm strength with the unwavering dedication of a devoted partner. "Thunderbird," perhaps the album's most stark and intimate performance, finds Phillips overwhelmed by the mighty bird of myth-and equally enchanted with the mysteries and uncertainties of earthly attraction. Since first emerging in the early '90s as the front-man and songwriter of the internationally acclaimed trio Grant Lee Buffalo, Phillips has been drawn to the conflicts at the heart of the American experience. The resulting body of work, which consists of four GLB albums and six uniquely divergent solo albums, has placed Phillips among the most revered and admired songwriters of his generation. His post-GLB career in particular has found him exploring a wide range of palettes and textures, from the roiling synthscapes of Mobilize to the rootsy clarity of the pedal steel-laced Virginia Creeper. Walking in the Green Corn shares an elemental purity and richness with Virginia Creeper, but further pairs down both the performances and the compositions. "It comes down to the purest form of expression that I can offer," Phillips explains. "I have to get off on my own, allow myself to disappear to do my best work." Walking in the Green Corn comes together as an evocative penetration into our own troubled era. And yet, the album's optimistic title track completes the album on a meditative, redemptive note-implying that the potential for change and betterment is within reach, and that perhaps the best solutions can be found by looking backwards and forward simultaneously.
This website uses cookies to personalize content and analyse traffic in order to offer you a better experience.
I accept Learn More
back to top