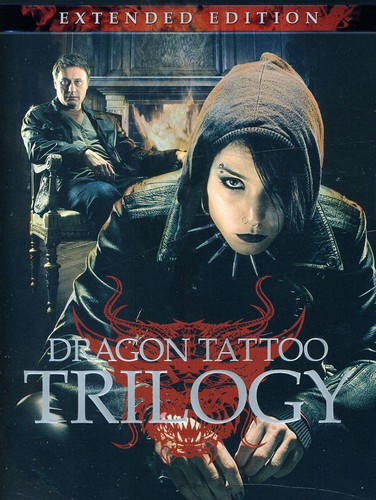 The DRAGON TATTOO TRILOGY: EXTENDED EDITION contains more than two hours of additional footage not seen in the theatrical versions of the original Swedish films (THE GIRL WITH THE DRAGON TATTOO, THE GIRL WHO PLAYED WITH FIRE and THE GIRL WHO KICKED THE HORNETS NEST). Amassing a total of 9 hours of story content and presented in 6 parts, this complete version of the international hit series restores notable characters and subplots from Stieg Larssons best-selling novels, most significantly in the portrayal of Erika Berger (Lena Endre), the editor of MILLENNIUM magazine as well as Mikael Blomkvists friend and occasional lover. Starring Noomi Rapace and Michael Nyqvist, DRAGON TATTOO TRILOGY: EXTENDED EDITION is the quintessential set for lovers of the books and a must-have for fans of the film trilogy.
back to top