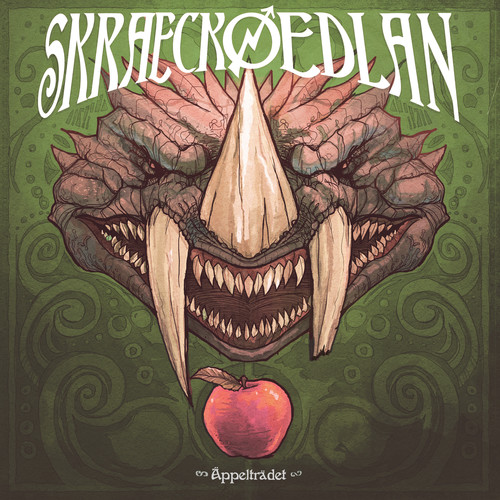 Fuzz-science fiction rockers Skraeckoedlan are set to do a international release of their debut album 'Ă„ppeltrĂ¤det' (The Apple Tree). Ă„ppeltrĂ¤det was recorded in 2010, in Truckfighters' Studio Bombshelter. Originally released in Sweden 2011. Skraeckoedlan's debut album 'Ă„ppeltrĂ¤det' will once again see the light of day, when it returns as a 180g transparent green vinyl housed in a single sleeve cover with updated artwork. Ă„ppeltrĂ¤det' have been a hard gem to find. The release is now available for the first time ever world wide. Also emerging anew are Skraeckoedlan themselves. While still singing in their native tongue, telling stories about mythological beings and cosmic wonders, having just come out of hiatus the band recently made the transition from quartet to trio. The as of now three-piece shares the following words concerning the reprint: "The reissue of Ă„ppeltrĂ¤det is, in a somewhat allegorical sense, a celebration of what has been and to a certain extent of what still is, but it also serves as a kind of bridge to what will be. These are our roots and they grow deep."
back to top