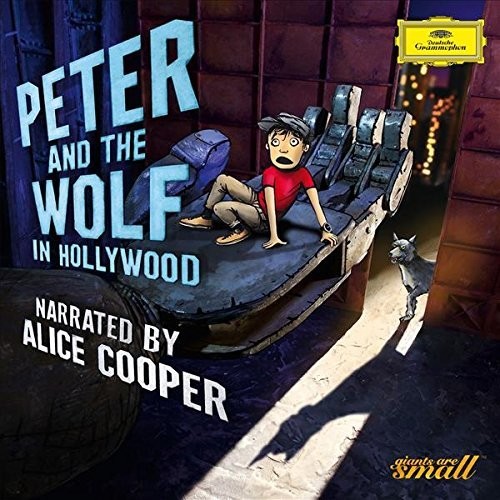 American rock legend Alice Cooper lends his voice for the narration of this classic story! A brand new DG recording of Prokofiev's childrens classic, Peter and the Wolf now coupled for the first time with a specially-written prequel.

The concept developed by the New York production company Giants are Small extends for the first time ever the Peter and the Wolf we all know by a 30min prequel with the full blessing of the Prokofiev Foundation to a one hour piece of family entertainment.

The best-loved story is now placed in an urban contemporary setting Los Angeles with a thrilling plot full of suspense and humour.

The imaginative pre-story places Peter and the Wolf in Hollywood, whilst weaving together excerpts from some of the greatest symphonic masterpieces by Wagner, Mahler, Elgar, Puccini, Mussorgsky, Prokofiev, Schumann, Satie, Zemlinsky, Grieg, Smetana.

The story in a nutshell: Young, orphaned Peter comes to live with his hippy grandfather in LA and is having the time of his life; suddenly, this special trip is interrupted by a Fox News breaking news bulletin: A Wolf Has Escaped From The Zoo!

A tumultuous series of events involving Peter, his Grandfather, the duck, a cat, a little bird, the police and insatiable paparazzi (as the hunters), and of course the Wolf, lead us directly into the famous original story by Prokofiev: And so Peter opened the gate and went out into the big green garden ...

By discovering the hero in himself Peter captures the beast and becomes Hollywood s unintended celebrity.

Performed by Germany's National Youth Orchestra, and under the baton of excellent, young conductor Alexander Shelley, this is a fresh, energetic and extremely powerful interpretation made for the young and the young at heart